“schoolmarm” captures the tensions and dilemmas of American education

T hough I’m fairly sure I’d heard the word before, the first time the word schoolmarm fully registered with me came somewhere in Dana Goldstein’s fantastic book, The Teacher Wars: A History of America’s Most Embattled Profession. I followed one of her references to Frances Donovan’s 1938 book, The Schoolma’am and I was enamored. The word, the sentiment, the mixed messages … I realized I adored the word schoolma’am and its more common sister schoolmarm.

Depending on which resource you read, a schoomarm is a vibrant young, unmarried woman teacher (Evening Star, 1915; Gallipolis Journal, 1852) or an elderly, unattractive woman teacher who has lost her joie de vivre (The Daily Record, 1953.) A schoolmarm is gentle and kind. She is harsh and will beat her students to achieve her pedagogical goals. She is wise and a rich source of knowledge. She is naïve and knows nothing about the “real” world. She is terse. She is patient. She is someone to be pitied. She is someone to be admired.

In a word, “schoolmarm” captures the tensions and dilemmas of American education.

Although much of education has been shaped by men, mostly White, with access to power, the person most likely to be in front of the classroom is a woman, mostly White. In tracing back her roots, we bear witness to the history of these United States and our schools. We can see how White women too often chose race solidarity over gender solidarity and worked for privileges they would deny women of color. We see how non-disabled educators worked to keep disabled educators and children with disabilities out of their classrooms and how straight teachers discriminated against their LGBTQIA+ peers and students. There’s the history of White Southern educators shoring up the “Lost Cause” narrative and the way Northern educators supported racist narratives during and following Reconstruction. Schoomarms weren’t a part of the NEA’s Committee of Ten but they organized a strike in 1968 against a mostly Black-led community school board in NYC.

Schoolmarms were leaders in the suffrage, early feminist, and labor movements. Teachers were, and are, instrumental in the long work towards equity and equality. They advocated for children with disabilities during the passage of the Americans with Disabilities Act and helped craft federal policies like the Individuals with Disabilities Education Act and state-level policy like New York State’s Dignity for All Students Act. Too many teachers have lost their lives through the simple act of showing up to work the day of a school shooting. Too many have taken a second, or even third job, rather than leave for the private sector.

Schoolmarm, not unlike America, is a word and concept that contains multitudes. It sits in tension with its own history, which makes it perfect for these times and this type of work. Schoolmarm Advisors is focused on helping education authors and publishing houses tell a clearer, more complicated truth about – past and present – in order to create the conditions for a more equitable, better future for all of America’s children.

“Schoolmarm” in the Media 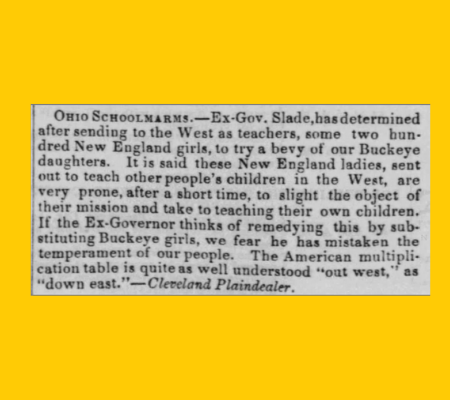 Ohio Schoolmarms. Ex-Gov. Slade has determined after sending to the West as teachers, some two hundred New England girls, to try a bevy of our Buckeye daughters. It is said these New England ladies, sent out to teach other people’s children in the West, are very prone, after a short time, to slight the object of their mission and take to teaching their own children. If the Ex-Governor thinks of remedying this by substituting Buckeye girls, we fear he has mistaken the temperament of our people. The American multiplication table is quite as well understood “out west,” as “down east.” Cleveland Plaindealer

Since the cold weather came on it has been found necessary to raise the salary of Indiana schoolmarms, as they have been compelled, to again wear shoes and stockings.

The Schoolmarm of To-day. The intelligent and successful school-marm of today is the beautiful flower of developing, growing, expanding, aspiring womanhood. No more significant fact could be pointed out as indicating the rapid changes that are taking place in the position and influence of women than to compare the schoolmarm of today with the school-marm of the past. The schoolmarm of the past was respected, but commiserated. But the schoolmarm of today is a totally different being. She is proud of her membership in a profession whose dignity and importance are every day being more widely recognized. She enters upon her work with enthusiasm, and performs it with the disposition and aims of the artist. She dresses well, and is cheerful and happy. Out of school she believes in seeing life and enjoying herself…  The American schoolmarm is, indeed, one of the most important and most admirable of American institutions. All hail the schoolmarm who goes to Europe for her vacation.

A General Average or Character

The schoolmarm, like the poet, is born, not made…. The accompanying composite picture represents 27 schoolmarms selected as types from as many States of the Union. The photographs of which the picture is a combination were chosen at random from a number representing similar attitudes. It will be seen that the composite face is an intellectual one, and evidences executive ability.

The forehead is broad, the head well-shaped, and the eyes expressive of sincerity. The length of chin, breadth of cheek and firm month show a good deal of latent character, and yet the general aspect of the face is thoroughly sympathetic and womanly. On the whole it may be taken as a fairly accurate representation of the national type of schoolmarm.

From The Battle Cry of the ‘Schoolmarm’

… I thought a schoolmarm lived on a prairie and worked in a one-room schoolhouse. That she hid her sad, spare figure beneath floor-length skirts and high-necked blouses. She taught “rithmetic” to students who used slates or inkwells. She was unmarried, sexless, prim and proper, severe and scolding — and oh, yes, she EXISTED IN THE 19TH CENTURY. No wonder I did not understand that I was a schoolmarm.

But thanks to Elizabeth Warren, I’ve learned that we schoolmarms transcend time and space. Any woman who “professes” — as Warren did as both a Harvard Law professor and a candidate — risks falling into that category, morphing instantly from erudite expert to spinsterish shrew. No need here to rehash just how often Warren was called a schoolmarm — it has long been the go-to term, the magic word that turned all her strengths to weaknesses. 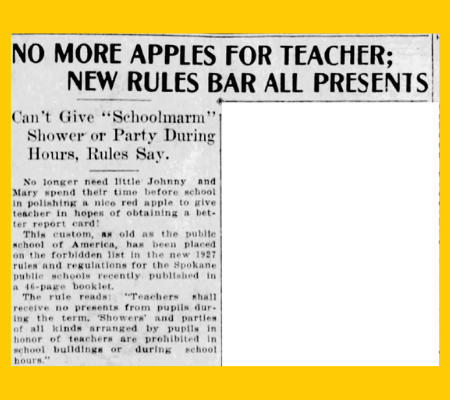 Can’t Give “Schoolmarm” Shower or Party During hours, Rules Say. No longer need little Johnny and Mary spend their time before school in polishing a nice red apple to give teacher in hopes of obtaining a better report card!

This custom, as old as the public school of America, has been placed on the forbidden list in the new 1927 rules and regulations for the Spokane public schools recently published In a 46-page booklet.

The rule reads: Teachers shall receive no presents from pupils during the term. “Showers” and parties of all kinds arranged by pupils in honor of teachers are prohibited.

This website uses cookies to improve your experience. We'll assume you're ok with this, but you can opt-out if you wish.